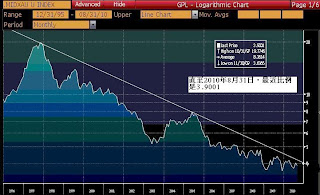 Hong Kong (HK), , and mainland Chinese cities have seen the world’s highest price appreciation in the last couple of years. Despite measures to cool off the housing markets and HK prices continued  climbing for much of 2011, although the rate of appreciation was slower than in 2010 and sales volumes decreased sharply.

High economic growth and negative real interest rates, as well as demand from wealthy Chinese buyers (who purchase as much as 40% of higher-end units according to Colliers Intl HK) have been fueling a speculative buying frenzy. Investors have driven real estate up to nosebleed prices, hoping to find that proverbial greater fool to sell to.

Well, there may not be any such fools  left. The market started to turn in mainland (prices across Chinese cities have been dropping since October) and prices in HK equally started correcting in late 2011. Average prices of higher-end apartments in Singapore were, in 2011, above $20,000/m2 and average prices of top-end homes came to  more than $30,000/m2 (according to Savills); the record sales price of a condo was $58,000/m2. HK prices reached similarly outlandish levels  after a near 70% rise since 2009; according to Savills’ Global Cities Survey HK is the most expensive residential property market worldwide, with prices 55%higher than in .

Unsurprisingly, HK and properties have the lowest rental yields in the world ( aside) at 2-3.5%. Only is even worse with yields under 2%. (Note that these are gross yields!)

Great post. I was checking constantly this blog and I'm impressed! Extremely useful info particularly the last part :) I care for such info much. I was looking for this certain information for a long time. Thank you and good luck.
Here is my website how to make an app

eToro is the ultimate forex trading platform for newbie and advanced traders.